Wheat Midi is a Nintendo Wii Wiimote and attached Nunchuk to MIDI note event converter, made to simulate drumsticks.

Supported controls are the Wiimote directional pad, most of the buttons on both the Wiimote and Nunchuk, and accelerometer (motion detection) on both.

This VST plugin tries to shows you what chord you are playing.

A MIDI plugin that acts as a MIDI latch/hold. A “note on ” message is converted to a note off for any playing notes. A “note off ” message sends a note on if a note is not playing and sets it to “playing”. This allows you to quickly play a chord and it will sustain until you play a new chord. Deactiviting the plugin will kill the last chord played.

A MIDI plugin that allows the bottom half of the keyboard to transpose the top half. Using your camera instead of an expression pedal or MIDI controller knob provides the ability to use any external AudioUnit/VST effects in a whole new way.
Now you can control the VST plug-in settings in real-time without using your hands.

For Guitarists
Why not to change the plug-in parameters in the Amp Simulator while playing using your lips?
Now the wah-wah pedal or any other effect will be within reach of your iPhone.

For Keyboardist
You don’t have an expression pedal slot on your keyboard?
Now you can use the Wah-Wah app to control volume, modulation, pitch or any other parameter hands-free. You get one more place to work with effects.

It is a fascinating step into exploring accessibility in music-making.
You will discover that our face controller may be more intuitive and easier to learn than a foot pedal.

MIDI Connection Guide (also available from within an app). MuRF_Controller is an exciting addition for any MIDI MuRF owner wanting to easily control and expand its power and capabilities from within their DAW.

The first ever made!

VocController is a simple but powerful plug-in that generates MIDI info for Yamaha’s Vocaloid VSTi. It can be triggered from standard MIDI data therefore making it possible to play words almost instantly at any note and velocity from a keyboard controller or a MIDI track. VeloScaler is a VST plugin for controlling and modifying the velocity value of incoming MIDI notes.

Use up to 5 different bands, filtered on either the incoming velocity or the MIDI note number. You can set a minimum and maximum value for each band, and scale the velocity by a specified value (either an absolute value, of as a percentage), which can be randomized. This will create interesting variations if your destination instrument is set to respond to velocity. 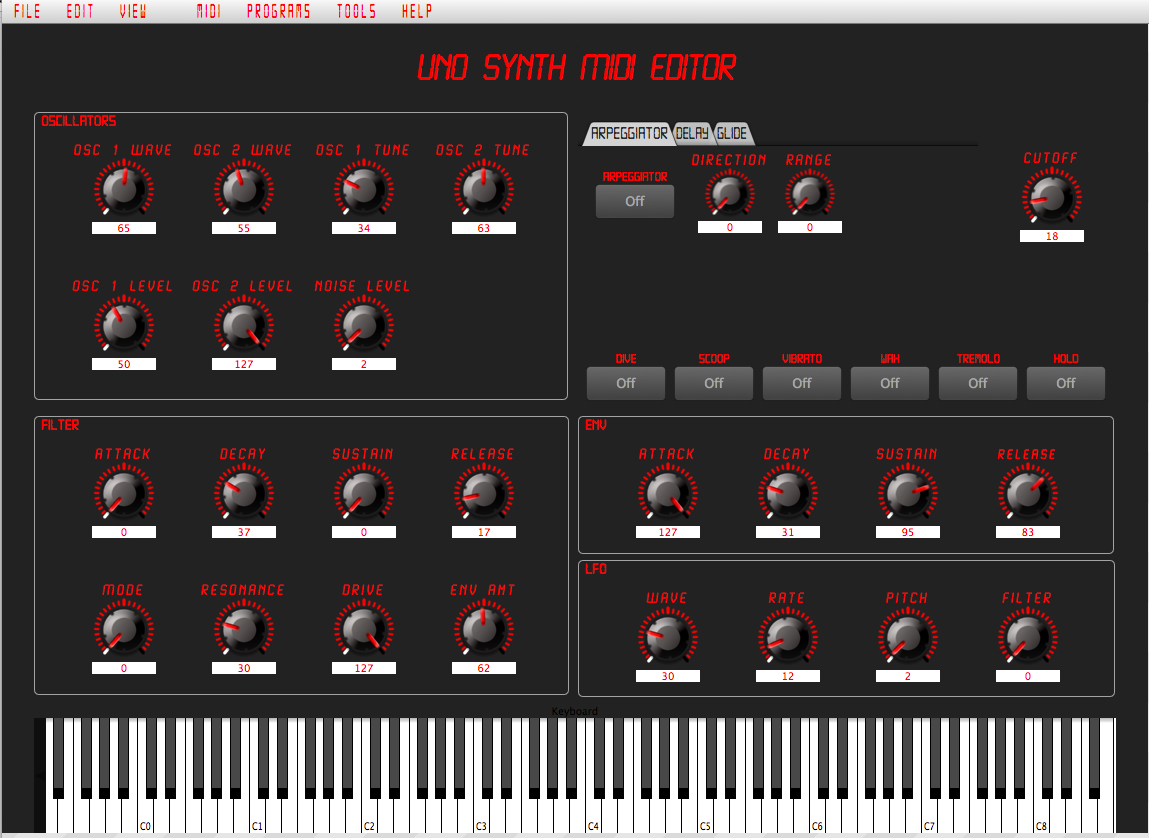 UNO Synth MIDI Editor offers access to most of the onboard parameters directly on screen, including some “hidden” parameters like full ADSR envelopes, Glide on/off and time.

Current version is 0.9 Beta and it’s available as a stand-alone app for Win and Mac. Transition is a generative MIDI sequencer. The basic idea is that bots move through a matrix of cells until they encounter a wall, another bot, or an obstacle.

When a bot hits a wall it will trigger a note, or a chord. The note/chord is based on the scale degree and octave settings of the wall cell. The output can be transposed up or down within the selected scale by incoming MIDI notes.

When a bot crashes with another bot they will both change direction. When a bot encounters an obstacle the effect on the bot is based on the type of obstacle (for example it can change direction, jump to another part of the matrix, change speed, or pause movement).

There are numerous settings you can edit to control the behavior of the bots and the MIDI output they generate. The various randomization features allows you to create more interesting and unpredictable output. Most of the parameters can also be automated.

Transition gives you an interesting and fun way to come up with new musical ideas. It can produce a chaotic random result, work more like a standard step sequencer, or something in between.